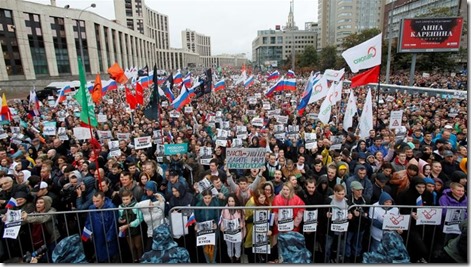 Up to about 60,000 people haver demonstrated in Moscow today demanding free elections in Russia, in what is being seen as one of the country’s biggest political protests since 2011.

Protesters gathered on Saturday at the central Prospekt Andreya Sakharova street for their fourth consecutive weekend demonstration over the exclusion of opposition and independent candidates from the Moscow’s city council ballot.

Some protester’s carried placards with “Give us the right to vote!” and others carrying pictures of activists arrested at earlier protests.

The protests started after after the verification of the signatures collected by the candidates, the Moscow City Election Commission (MCEC) refused to register most of independent opposition candidates.

In Moscow it is acceptle to have peaceful assemblies but rallies are prohibited.

One of the candidates in the election whose candidacy was refused is the very popular Lyubov Sobol lawyer of the Anti-Corruption Foundation, member of the Russian Opposition Coordination Council (2012-2013). She has been arrested by police and has been on a hunger strike following the 27th July Rally in Moscow. The Russian Government invoked a criminal case against candidates Dmitry Gudkov and Ivan Zhdanov, Alexander Solovyov and Nikolai Balandin for hindering the ‘electoral rights of the work of the election commission’ (article 141 of the Criminal Code of the Russian Federation)

Also anumber of candidates and rally organisers have been taken in for interrogation. Lyubov Sobol who went on hunger strike in the MCEC building was pulled out publicly from the building as she filmed this on social media with guards maintaining the heavy handed eviction was to “shake out bedbugs and parasites” of the sofa she occupied.

Worldwide there as been condemnation and concern over the treatment of the opposition candidates for the Moscow City Duma election which is due to be held on September 8, 2019