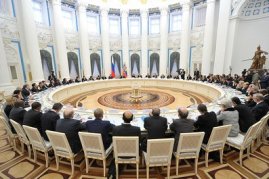 The finance ministers meeting today at the G20 held in Moscow have today pledged to ensure that multinational companies will no longer be able shifting profits from a home country to pay less tax elsewhere – the aim is to prevent tax avoidance by large companies.

France, Britain and Germany have been the main proponents seeking radical changes to existing european legal loopholes and members of these countries also promised to refrain devaluing their currencies to gain economic advantage; which could cause a “currency war”.

The fears had been sparked by Japan’s recent policies, which have driven down the value of the yen, aiding its exporters.

Organisation of Economic Co-operation and Development (OECD) found that multinational firms could exploit gaps between tax rules in the different countries in which they operate.

The finance ministers of the UK, France and Germany – George Osborne, Pierre Moscovici and Wolfgang Schaeuble have called for international action to crack down on companies transferring profits from their originating country to another in order to lower the tax paid.

Mr Osborne decried a global taxation system he said had been guided by principles set out by the League of Nations in the 1920s, with few changes since.

How does Price Fixing work?

An imaginary company CiceroUK Ltd is a subsidiary of the imaginary US company CiceroCorp. It provides books from the paper that’s manufactured at Paper Corp factories in China, and then sells them in the UK.

“Transfer pricing” rules apply to the cost of parts, the fee payment and the interest on the loan. If Paper Corp overcharged for any of these, it would reduce CiceroUK corporation tax bill in the UK, while increasing CiceroCorp axable profits in another country.

For more information in how companies are avoiding paying Corporate Tax see http://www.bbc.co.uk/news/business-20580545