Las Vegas Shooting one of the worst in US history 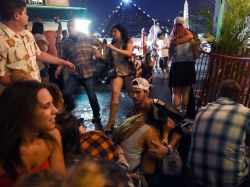 A lone gunman released a rapid-fire barrage of bullets on an outdoor country music festival in Las Vegas Sunday night, killing at least 50 people and injuring more than 400 others, police said, in the worst mass shooting in modern American history.

From his room on the 32nd floor of a glitzy hotel, the shooter, identified by law enforcement officials as Stephen Craig Paddock, 64, of Mesquite, Nevada, fired shot after shot down on the crowd of about 22,000, sending terrified concertgoers running for their lives.