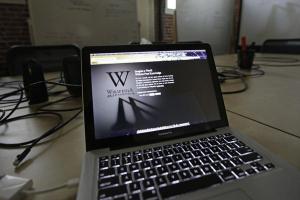 In the wake of widespread online protest, the House and the Senate have stopped both the Stop Online Piracy Act (SOPA) and the Protect IP Act (PIPA) in their tracks. Just this Friday morning, Senate Majority Leader Harry Reid (D-Nev.) announced that he has canceled next week’s Senate vote on PIPA, which is now indeed opposed by many of its co-sponsors. Shortly afterwards, House Judiciary Committee Chairman Lamar Smith (R-Texas) said that SOPA will not be taken up as planned and that legislators must “wait until there is wider agreement on a solution.”

Reid indeed acknowledged that ”recent events” — the blackout on Wikipedia and other sites including Reddit and the other protests involving an estimated 115,000 websites this past Wednesday — had played a role in his decision to postpone the vote.

PIPA sponsor Senator Patrick Leahy (D-Vt.), the chair of the House Judiciary Committee, agreed to the change of course only “reluctantly,” painting a dire picture of how Chinese and Russian internet thieves “are smugly watching how the United States Senate decided it was not even worth debating how to stop the overseas criminals from draining our economy.” Senators have caved into pressure, Leahy charged, and will one day rue their making a “knee-jerk reaction to a monumental problem.”

The Tech Community and Hollywood

There is no question online piracy is a problem. Tech companies including Google and Facebook had strongly objected to SOPA and PIPA, which granted the US Department of Justice the power to go after foreign websites offering illegal copies of movies, music and other content for free. Under these proposed laws, search engines would have had to eliminate links to such sites, while ad networks and companies that process payments would have been forbidden from doing business with them.  Tech companies have been arguing that, as currently written, both bills could curtail free speech and innovation on the internet by placing an “unreasonable burden on websites to police user-generated content,” with the result that perfectly legitimate websites could — as Wikipedia did on Wednesday — go dark. Last Saturday, the Obama administration expressed its concerns about how SOPA and PIPA could “[disrupt] the underlying architecture of the Internet.”

Hollywood, the music recording industry, book publishers and the United States Chamber of Commerce have all backed SOPA and PIPA, as a means to stop the “rampant piracy of American cultural wares” by websites overseas.

Former Sen. Chris Dodd, head of the Motion Picture Association of America (MPAA), described the postponement of SOPA and PIPA as a sign that the US government is “failing to act” in the fight against online piracy while still allowing the Internet “to be a safe haven for foreign thieves.” Meanwhile, Dodd said, American jobs are being lost and consumers are in danger of being “exposed to fraudulent and dangerous products peddled by foreign criminals.” But in an interview with the New York Times on Thursday, Dodd seemed to “raise the white flag,” acknowledging that the MPAA was “taken aback by the mass online protests against the bills” and calling for Hollywood and the tech community to “meet and hammer out their differences in a White House summit.”

Next Up: The OPEN ACT

As Don Reisinger says on CNET, both Reid and Smith remain “committed to pushing some kind of anti-piracy legislation through Congress.” Reid said in a statement:

“There is no reason that the legitimate issues raised by many about this bill cannot be resolved. Counterfeiting and piracy cost the American economy billions of dollars and thousands of jobs each year, with the movie industry alone supporting over 2.2 million jobs. We must take action to stop these illegal practices.”

Indeed, on the horizon is a related bill, the OPEN ACT, sponsored by Sen. Ron Wyden (D-OR) and Rep. Darrell Issa (R-CA), who have been “stalwart” critics of SOPA and PIPA. The OPEN ACT makes the International Trade Commission rather than the DOJ the enforcer for online piracy and also offers a narrower version of pirate websites. As Talking Points Memo points out, some are not sure that focusing on online piracy in particular is the right approach:

“Where we need to start is actually getting a ‘User’s Bill of Rights’ together for communication and sharing of culture,” [Tiffiniy Cheng, co-founder of Fight For the Future, an online advocacy non-profit] said. “We need to defend way people communicate online. Once we get that in place, then we can go forth from there.”

Cheng said her group is working on drafting a Internet User’s Bill of Rights at the moment.

Internet activists have claimed victory in the fight against SOPA and PIPA. But we need to focus equal scrutiny on the OPEN Act and, as Cheng says, ask if policing online piracy as these bills describe is in the best interests of all; in the best interests of keeping the internet the site of innovation, creativity and freedom of expression that we have come to know it to be.

10 thoughts on “SOPA AND PIPA GONE, NOW THE OPEN ACT?”

Jake Bugg – Be Someone

Have I Got News For You

A Year of Lockdown

A Year of Lockdown